A Critical Review of David Platt’s “Before You Vote”

David Platt’s latest book, released on September 19, 2020, is already a bestseller and clearly designed to guide the church’s vote in the upcoming presidential election. In the first few pages of Before You Vote this pastor makes it abundantly clear that he is extremely concerned with regard to how the church will vote in this particular election, stating that “every election people say this is the most important election of our lifetime, but this time it actually is.”

One question was clearly the focal point for Platt in writing this timely book: How can any Christian vote Democrat in this day and age? 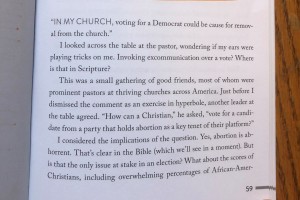 Remembering President Trump’s surprise prayer visit to McClean Bible Church on June 2, 2019, Platt begins his book by reiterating his apologetic explanation of allowing the president on stage and praying for him on that Sunday, and it would continue throughout the book.

“Should we bring the president onto the stage in a church gathering to pray for him publicly (in front of a sea of cameras)? Unfortunately, there’s no Bible verse answering that question specifically. First Timothy 2 doesn’t say, “When the president is on his way back from playing golf and stops in at the end of your church service, here’s what to do.

Question #1  Does God call me to vote?

Continuing his apologetic explanation of praying for Trump last year, Platt eventually gets to the first question, concluding that there is no direct command from God to vote, therefore “it could be possible for followers of Jesus to make a prayerful, intentional decision to “steward their vote” by not voting.”

Question #2  Who has my heart?

In the typical, theological liberal fashion Platt equates concern for the direction of the country with forsaking Christ,  excoriating the idea of “blindly supporting or habitually siding with certain candidates or parties,” insisting that “we must reject this type of political absolutism because our trust resides in Jesus alone.” He wraps up question two by reminding everyone that the church can never align itself with any one political party because “we are for Jesus.”

Question #3  What does my neighbor need?

As expected, Platt starts out with a heart-wrenching story of immigrants in his neighborhood who fled El Salvador after the husband was killed by Salvadoran drug traffickers, immediately raising two important questions for me: Are they here illegally? Was the husband/father involved in drug trafficking?  Platt warns that “if we are not careful, people like Patricia will be far from our minds when we cast our ballots.”  He continues, “with an air of nationalistic pride, electioneers paint a picture of a superior and more prosperous country in which you can achieve all your individual dreams. Before we vote we must ask ourselves who’s good we should promote with our vote.”  He then launches into an all out assault on “your rights,” and in a demonstrable perversion of Luke 9:23, Platt insists that you must “die to your rights”  in order to serve Christ. This revelation leads Platt into several more pages preaching the social gospel. He reminds every evangelical voter that they “follow a King who commands us to lay down our rights.” For Platt, failure to do so is equivalent to “selling your soul to a political party whose campaign slogans center on you,” instead of “your neighbor.”

Question #4  What is the Christian position?

Platt comes out swinging at this very idea, excoriating the assumption that Christians cannot vote democrat, and insisting that there is no one candidate or party that is better aligned with a biblical worldview than the other. He appeals to the individual conscience, reminding the church that on many issues that plague the world today “there are many Christian positions that might be possible” and that “Jesus never actually spoke to many of these issues directly.”

Question #5  How do I weigh the issues?

Platt is direct and to-the-point: “Particularly in a two-party system where followers of Jesus feel squeezed into a mold in which they don’t necessarily fit, as we’ve seen, biblical principles are not exclusively practiced by one party or the other.” He continued, “And don’t both political parties show evidence of God’s common grace?”  Ouch! And there it is! The error of common grace rearing its ugly head. No, there is no grace for the wicked. They are instead benefactors of God’s providence, not His grace.  Through a series of questions and exercises, Platt spends quite a bit of time attempting to convince the reader that the church has no grounds to condemn the Democratic Party:  “In an even greater way, asking these questions may draw you closer to God. If you’re honest in answering these questions, you will find yourself growing in your ability to appreciate God’s grace in people who are very different from you, and even in people who might be opposed to Him.”   Platt spends several more pages propping up the Democratic Party and making the case that “based on history” there is no guarantee that voting Republican will put a stop to abortion, adding that Christians should be “suspicious of such an idea.” He then asked this clearly purposed, rhetorical question: “Might it be possible then, for a Christian to believe that abortion is biblically wrong but at the same time want to advance biblical justice in other areas? Might it be possible for Christians to support a Democratic candidate or the Democratic Party in order to stop other injustices?…remember that our goal is not checking a certain box on a ballot.”

Question #6  Am I eager to maintain unity in the church?

If you are familiar with Platt you know how this one is gonna go: Unity and Diversity above all else!  He denounces the idea that a person’s theology will determine their political views, stating that “significant research has shown that this controversial view is not true.”  He complains that “very few people attend church services with other Bible-believing Christians who hold different political views than them. This is tragic, and I don’t use that term lightly.”  He critically continues “we divide into churches based on political convictions and we only surround ourselves with people who think like us.” (I’m thinking Acts 4:32 about right now: Now the multitude who believed were united in heart and mind..)  Platt demanded that the church must be diverse in political convictions and Christians must “cultivate just these kinds of relationships.” 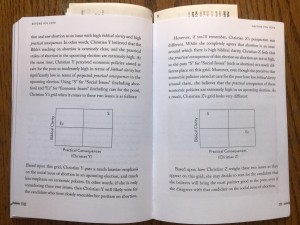 It is important to note that religious freedom is the main issue of utmost importance for the Christian, over and above all other issues, it is this one issue that keeps the door open to freely exercise religious worship and to preach the gospel to every creature. And this is The Great Commission, nothing else.  This paramount issue is only mentioned once, grouped in with a long list of other “social issues.”

Platt concludes the book:  “When you hold your ballot in your hand, pause and thank Jesus for His loving leadership of your life and His sovereign lordship over this election. Then, as you check the box, offer this simple, sincere prayer: Lord, may your kingdom come.”  Spoken like a true warrior (social justice warrior, that is).

A voice from the past…

“Discernment is not a matter of simply knowing the difference between right and wrong, rather it is knowing the difference between right and almost right. I would not give a penny for your “love of the truth” if it is not accompanied with a hearty hatred of error. The best interpreter of a book is generally the man who wrote it. The Holy Spirit wrote the Scriptures, go to him to get their meaning and you will not be misled and if there be anything in the church to which you belong which is contrary to the inspired Word, leave that church.”