For me, this bombshell of a story has had an unrelenting stench since the first so-called “victims” began making their rounds from the halls of the Miami Herald and NPR to countless network and cable platforms- the more I heard and saw, the stronger the stench became.  And much like Minneapolis and the so-called deadly virus, a narrative was being crafted by a shady cast of characters alongside a handful of useful idiots that would surely guarantee an enormous payday for all. This was my suspicion from the very beginning and has now become my conviction as the smutty saga ends.

In the not-too-distant past we would all have agreed that sex trafficking is human trafficking for the purpose of sexual exploitation. Rightly defined and understood it’s a form of modern slavery, whereby victims are non-consensually forced into sexual acts, usually after some form of inescapable coercion or abduction. Perpetrators of the crime were called sex traffickers and their victims were often drugged and guarded to prevent escape.  In a nutshell, to traffic was to force, and to be forced made one a victim. For nearly two years we’ve been bombarded with a constant barrage of stories about trafficking, pedophilia, rape and the repeated molestation of children, with assurance all along that there were mounds of irrefutable evidence that would all be presented in court. But in this era of redefining terms for the purpose of redefining truth, nothing is what it seems.

Fast forward one murder and a flimsy conviction later and what we actually ended up with was a lascivious, middle-aged rich guy and his pitiable (but constant) female companion propositioning more-than-willing high schoolers to participate in the torrid sexual escapades of not only themselves, but their friends and associates. As disgusting as this is it doesn’t fit the narrative- not even close. The few pictures in circulation reveal the smiling faces of physically mature young women enthusiastically partying and having a grand ole time. There is no evidence of being forced, trapped, or held against the will. On the contrary (and per Epstein’s request) most of the young women eagerly recruited their friends and anyone else who might be interested in this very lucrative gig.  This fact alone should’ve raised a major red flag with anyone following this story but much like Minneapolis and the so-called deadly virus, I’m finding that people in general are (at best) inexcusably gullible, or (at worst) under some form of the mass psychosis that has spread across the land. Either way, it’s inexcusable.

force
/fôrs/    make someone do something against their will; coercion or compulsion, especially with the use or threat of violence.

The only time I’ve personally heard mention of anything that even remotely resembles force was during a rather pathetic NPR interview, whereby a so-called victim now claims to have been “raped” on a regular basis at Epstein’s Manhattan townhome, of which she freely entered on every occasion.  After these “rapes” she would freely leave and head back to her swanky, upper eastside apartment paid for by Jeffrey Epstein.  When the overly sympathetic interviewer asked about this living arrangement the “victim” declined to speak too much about it, claiming that it makes her “uncomfortable” because “people just don’t understand.”  The interviewer softly and gingerly concurred that people really just do not understand. And I would like to publicly add my name to that pot- I certainly do not understand.  You see, way down southward here in Dixie we call that a kept woman, whereas if you head just north of the Mason-Dixon line she’s a mistress.  Any way you slice it…it’s a pie.

(For the record, the testimony of former prostitutes who are about to cash in on the biggest payday of their lives is not reliable evidence.)

ad·o·les·cent
/ˌadəˈles(ə)nt/    in the process of developing from a child into an adult.

Age is the crux of the issue and the glue that holds this house of cards together, so where did the modern concept of age as it relates to the transition to adulthood originate?  Although the first use of the word adolescence didn’t appear until the 15th century and came from the Latin word adolescere, it wasn’t until 1904 that the first president of the American Psychological Association, G. Stanley Hall, was credited with “discovering” the adolescent “stage”.  Hall’s understanding of youth was based on two ways of understanding human behavior: Darwin’s evolutionary theory and Freud’s psychodynamic theory. Hall believed that adolescence was a representation of our human ancestors’ phylogenetic shift from being primitive (ape) to civilized (man). Clearly the modern day understanding of age and adulthood is deeply rooted in evolutionary theory coupled with Freudian junk-science which has directly impacted the laws and restrictions that led to the modern concept of “the minor”.  This perverted idea of an adolescent stage is rooted in a flawed, worldly psychology and therefore we must conclude that it is false and never should have been a model for society.

The Holy Bible, on the other hand, which is the source of all truth for all time, is quite clear that the child transitions directly from childhood to adulthood, with marriage permitted and even encouraged once a female reaches puberty, as it is at this time that girls become young women and are clearly no longer considered children. Moreover, it was not unusual for a girl to have been betrothed (engaged) to her husband as early as the age of 12-years-old, though the marriage and consummation likely would not have occurred until sometime later.  Scholars believe, given the biblical account and the Jewish cultural practices, that the most plausible age of Mary when she gave birth to Jesus was 15 or 16 years old, meaning she was likely around 14 years old and already engaged to a teenaged Joseph when Gabriel gave her the news that she would supernaturally conceive and physically birth the Son of God.  This is an extraordinarily amazing testimony to the level of maturity, responsibility and sound judgment expected of a young woman.  This understanding of age and adulthood is rooted in the eternal truths of scripture and therefore we must conclude that it is the only appropriate model for a morally just society.

Hall’s perverted concept of age and adulthood undeniably shaped the most sinfully immature and incessantly unaccountable society that has ever occupied the planet.  And in the case of Jeffrey Epstein, countless young women sinfully, willingly and knowingly prostituted themselves for a price and now stand to walk away very wealthy “victims”.  Unashamed and unaccountable. 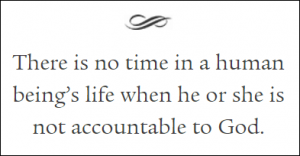 I stumbled upon the following excerpt from an article published by NPR during Ghislaine Maxwell’s trial that unwittingly makes the case:

“Part of the thing that the prosecutors used to excuse the fact that they weren’t going after the case was they would tell the girls, “You do understand that what you did was illegal.” And in a way, [the prosecutors] sabotaged their own case because they made the victims feel like they could get in trouble.  [Victims] said that they were very scared because at the same time this was happening, where the FBI was making them feel like they perhaps had broken the law, you have Epstein and his investigators and his lawyers on the other side digging into their lives and following their parents. It isn’t the kind of thing that would make a victim want to cooperate with authorities.”

Every single female- at every single party- on every single occasion- beyond a shadow of a doubt knew that everything they were doing was sinfully wrong and illegal. And in this the eleventh hour it is not a payday as victims that these young women most desperately need, on the contrary, it is repentance as guilty participants.

This is the real tragedy.

A voice from the past…

“Discernment is not a matter of simply knowing the difference between right and wrong, rather it is knowing the difference between right and almost right. I would not give a penny for your “love of the truth” if it is not accompanied with a hearty hatred of error. The best interpreter of a book is generally the man who wrote it. The Holy Spirit wrote the Scriptures, go to him to get their meaning and you will not be misled and if there be anything in the church to which you belong which is contrary to the inspired Word, leave that church.”